The International Writers Festival wrapped up recently in Ottawa.  I took in several events.  It is wonderful to have some time to do that sort of thing when one is beyond full-time work.  I have eyed the events at the Festival over the years and always found reasons why there didn’t seem to be the time to attend.  Now, I have scads more discretionary time-ah, it’s heaven.

As an undergrad student at the University of Saskatchewan many years ago, there was a period over a couple of years when a group of us hung out together.  Some of us were in the College of Pharmacy, one in the College of Engineering and another was pursuing a degree in history.  The fellow who was in history came with a nickname, a self-proclaimed nickname, he was “Cleveland Thomas Ohio”.  We called him Cleve.  Our group enjoyed going to movies, drinking beer, playing cards and shooting the breeze. We had a great time together.  I distinctly remember how Cleve regaled us with stories of kings and queens of long ago. He put them into a tale where he made the past come alive.  I recall thinking “why can’t I see that when I read history” for I was one who had to memorize history for it would lay flat and lifeless on the page and it wouldn’t stick in my brain.

Cleve continued and earned a number of degrees at the U of S.  For a time he was a teacher.  I saw him a few times over the years and would hear of his growing accomplishments as a writer over time.

And so it was that this college friend from decades ago came to our city to read from his latest book,  A Good Man.  I combed through photo albums to find pictures of those days so long ago.  The best I could do were pictures from a Hallowe’en dress up party (I hope it was Hallowe’en-either that or we had a weird sense of fashion).  Our youthful visages did not yet show the lines of life we now sport. I made copies of the photos and off we went to event. It was delightful to be at the reading and listen to the interview that followed. As he read I saw the accomplished novelist and short story writer and I also remembered the undergrad student.  Afterward we had a little visit, the author and me. Cleveland Thomas Ohio is no more.  He is the winner of two Governor General Awards and he has been made an Officer of the Order of Canada along with many other recognitions that former history student, Guy Vanderhaeghe.  He’s still full of good stories and good humour as you can see. 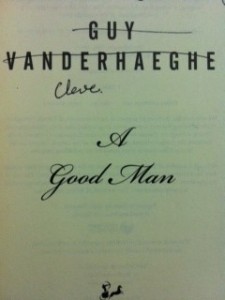