In the not too distant past, along this blog path I penned a piece about my experience with Anything But Syndrome (ABS) .  Today, a quick note to say, I am experiencing ABS once again.  Specifically, it is a case of ABCC-Anything But Christmas Cards.

It’s not all me though.  Technology conspires to throw up such barriers to my efforts that if you follow the thing to its logical conclusion, it’s no wonder ABCC is the result.

Start to feel a case of ABS coming on.

Good day, methinks, for a case of NBCC.  Nothing But Christmas Cards.  Speaking of which, I should go. 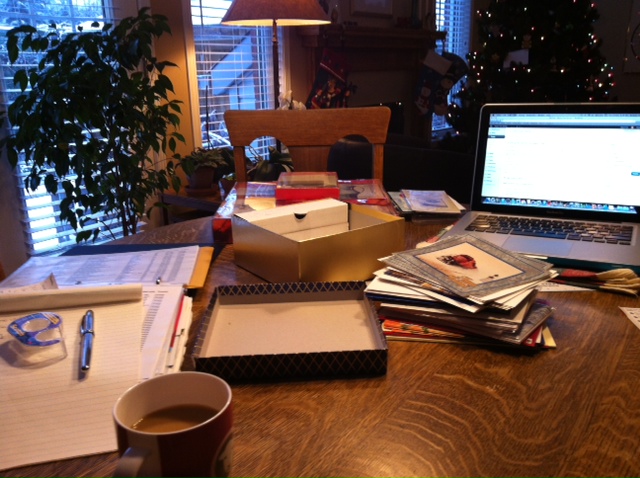 Mankind is bent on discovering and labelling its activities and observations.  Take the weather-and all the terms you hear now that you never used to hear.  They aren’t necessarily easy to understand-a plain language course for some people who think these things up might be in order. Here’s a few in the weather vein (pun intended):

Then there are terms for the human condition, for maladies, for behaviours.  And if you look into the history of the condition, you can usually find who initially coined the phrase.  I figure why should I be left behind.  It came to me recently that I have a syndrome…it’s the Anything But Syndrome-shortened of course to its acronym ABS.  I plan to bring this up at parties and family gatherings.  It should flow nicely.  A conversation often might move towards an illness (someone has RA-rheumatoid arthritis or have you heard about the increase in the diagnose of ADHD-attention deficit  disorder) and I’ll slip in and say “and I have been having quite a time with my ABS”.  I should get credit for initiating the phrase-I googled it and it doesn’t show up yet. So it’s mine.  And the neat thing is the acronym is adaptable.  It can have subsets.

Anything But Syndrome (ABS)

It’s not clear just how long I have lived with ABS.  My life now-beyond full-time work has granted me opportunities to observe things I haven’t observed before.  There just wasn’t time before to notice it.  It hit me like a plough wind recently.  My cousin Cliff and I decided it would be fun and high time to hold a family reunion.  We got together in November 2011 and I agreed to do the next bit-contact some family members from each of the branches on the family tree and so on.  It wouldn’t take long.  We thought August 2012 would be a good time to hold the reunion.  And I had LOTS of time to contact people…there are 9 months between November and August.

ABS- in this case it’s ABR

I didn’t forget I had committed to contact people.  I thought of every other thing I could instead.   I asked people about their experiences in organizing reunions (let people know early , they said).  I didn’t have phone numbers, there were other things to do and so on.  The months passed and finally one day when rolling out of bed, I thought-there’s only 6 months left before a reunion no one knows about!  I had a full-blown case of ABS..more specifically ABR- Anything But Reunion.  That got me going and to make the rest of the story short-planning is underway and hopefully we will have a good turnout-despite one of the organizers’ living with ABR.

Over the years I now recognize several subsets of ABS in my own behaviour.  I have lived with ABC (Anything But Cleaning), ABS (Anything But Studying) and ABP (Anything But Practising) for as long as I can remember.

I am likely not alone in living with ABS.  Perhaps we could start a support group.  Do you think you might be touched by the syndrome too?