Observation about our gardening efforts, Caroline and mine.

Last year we worked very hard.  We stooped over and spent hours and hours trying to pull weeds out of the hard-pan ground.  We tried to coax carrots to grow, lettuce was playing hard to get and cabbage never got past the mini stage.

This year we worked hard but we started with some 9 cubic yards of mushroom compost.  We spread it, tilled it in and made raised beds.  The soil became a dream to work with.  We bought straw to use as mulch between the plants and the rows. Weeds still grow but we can pull them easily and the plants that are doing well…they must be almost 2-3 times as big as last year!

It’s not all roses as we have some problems: potato leaf rollers have set upon one of our varieties of potatoes, cauliflower plants are huge but there’s no sign of the heads of cauliflower (do you know why that would be?) and the same goes for broccoli (all leaf and no eating bits). It’s been a very hot and dry year and we have tried to keep up to the watering but I imagine we could have done more.   But on the whole the organic matter has been a whole lot of magic.

Moral of the story-garden motto

Say what you will about crop rotation, drip irrigation, tilth, micro herd, good seeds and so on, as far as I’m concerned the moral of the story and a motto to garden by is to add organic matter or more plainly put:

Horse shit really works!  So if someone tells you that something is a load of horse sh@$, ask them how much they want for it.  We’re likely in the market for at least 4 cubic yards next year.

It’s been hot and dry in our neck of the woods this year.  We have been declared in a  Level 2 drought.    This isn’t good for all sorts of reasons but there are some benefits-fewer mosquitoes, not much for lightning and thunder (not enough humidity to muster up a decent boomer), reduced e.coli counts for beach swimming-thought I’d throw that one in.

Dry as it’s been, our garden, or maybe it’s the gardeners, is showing much improvement over  last year (so far).  Yes we’ve invested in all manner of things and we know more than we did last year.  We declare (to ourselves) that we have moved from the bottom rung of community gardeners to possibly mid-range.  One early morning last week I spent a glorious few hours-no mosquitoes-pulling weeds, talking to the plants, chastising whatever varmint is chewing on the yellow beets and thoroughly enjoying just being.  It was a morning glory-ous.

Evidence about dirt and happiness

There is some evidence that digging in the dirt..and breathing it in-maybe ingesting some is good for your health.  Growing up my Mom would bring us lunch out to the field.  We’d eat sandwiches with our very dirty hands (from hours of operating a tractor with no cab-there might be some grease in there too).  You could literally see the dirt from your hands transfer to the homemade bread and then into your mouth.  Mom used to say “everybody’s got to eat a pound of dirt a year”.   We secretly thought we ate 2 pounds a year to make up for the city kids who likely didn’t eat any.

Good News and Not So Good News

Good news-two rather robust looking pumpkins.  Bad news-some nefarious insect or blight is trying to suck the life out of the plant. Any idea what that might be or what we can do about it?

Good news-potato plants very big.  Bad news-potato bugs plus some sort of insect or blight is turning leaves brown and causing them to curl up-any idea what that might be? Or what we can do about it?

We held a breakfast come and go at the “farm” yesterday and we were proud to show people our gardening efforts.  Those who attended were likely hoping that once they showed up maybe we’d quit talking about the garden and they’d get some peace and quiet (or maybe a butternut squash come harvest time).  It was a pleasure to have people drop by.

Some days you can look and look for a greeting card that is just right and you come up empty.    Or you could choose a card thinking it was so very witty or fitting and find the recipient didn’t see it in the same light.    Has this happened to you?  I’d be interested in your true story.

Then once in a while you find a card and think “Aha, this will be great!”

We are invited to a friend’s birthday party tonight.  I bought her a card I thought very witty.  I hope she does too.  If she doesn’t then I guess there could  be a follow-up blog titled “No So Witty After All” 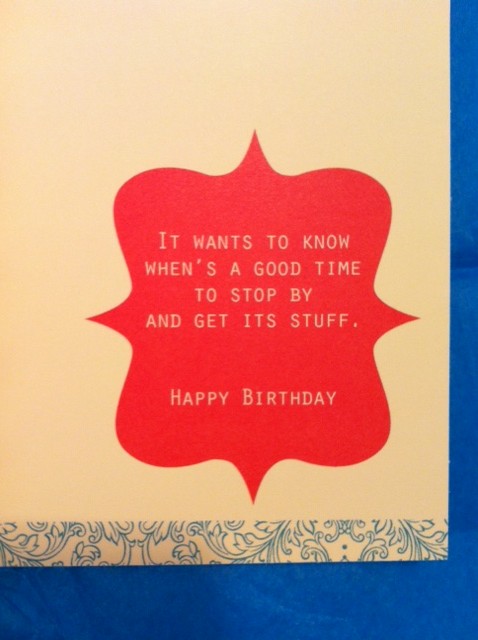 Some twenty years ago my sister gave me an album on cassette tape (remember those…or maybe not).  She’d heard about the performer, Garrison Keillor, on CBC radio.  Mr. Keillor, an American, is well-known as an National Public Radio (NPR) radio performer, an author, a humourist and essayist.  The album was “A Young Lutheran’s Guide to the Orchestra” and I listened to it time and time again.  I enjoyed the music and the stories that went with the album.  This makes me think I should likely buy it again-in a format I can listen to these days.

Garrison Keillor is the host of the weekly NPR radio show A Prairie Home Companion (PHC). I often listen to the archived shows.  There was a 2006 movie of the same name.  The movie was set around a single radio show and used the same set that Keillor and colleagues perform on at each show.  The show is quirky and warm and often showcases well-known performers as well as  local musical talent (the show is based in Minneapolis but does travel across the U.S. during the year).

We seized an opportunity to see a live performance of the PHC last week in Lenox, Massachusetts.  The venue is Tanglewood, the summer home of the Boston
Symphony Orchestra.

The stage is in the “shed” and you can purchase tickets either in the shed or out on the lawn.  We learned that to picnic on the lawn before and during the concert is part of the charm of Tanglewood performances.  The venue (The Serge Koussevitzky Music Shed and lawn) can accommodate upwards of 20,000.

The day was perfect, June 30th, 2012 as we drove to Tanglewood.  It was sunny and very warm, with a little breeze. The concert was great.  Keillor said (tongue in cheek) they like to give local talent a chance and so had Arlo Guthrie as one of the guests.  You can hear the show on the archives of the PHC website.  I was thrilled to be at the concert and enjoyed the evening immensely.

And one of the very best parts of the experience was what happened after the live broadcast (2 hours) signed off.  The PHC broadcast starts at 6pm and ends around 8pm. A number of audience members left early, probably thinking getting out of the parking area would be a nightmare.  Another number left at the end of the show while many of us stayed and called for an encore.  And did we get encores.  Pure singing-some folk, some songs from long ago (my Dad would have loved their choices) and some rock and roll.  All the band and guest performers (e.g. Arlo Guthrie) came out and the songs went on one after the other.  The audience stood and clapped and sang and danced.  They walked up the aisles to get closer to the stage soaking up the experience.

After they had played for almost an additional two hours and left the stage for the third time we started toward the car.  We weren’t aware of the after show soiree and we hadn’t eaten.  It was closing on to 10pm.  We were on our way to the parking lot and heard the band start up again!

Do you have a concert or live show experience that stands out in your memory?  A performance you found so very enjoyable.  What were the reasons? Who you attended with, the performer, the venue, the weather…it seems a combination of all of the above for me. 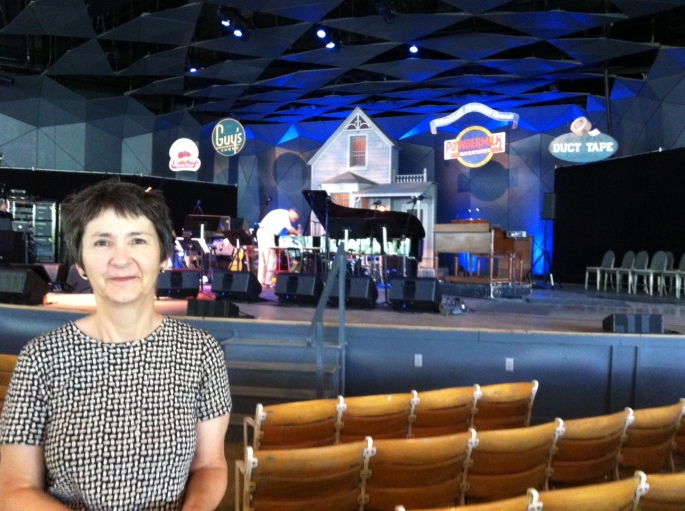